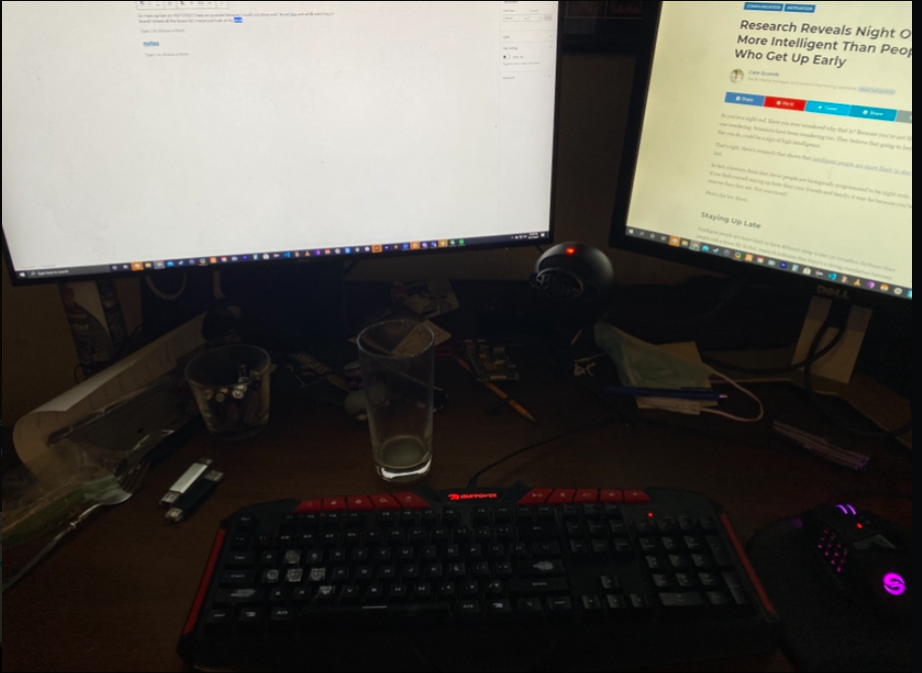 Why Smarter people stay up later and are messy

So I was up late on 10/17/2021 I was on youtube because I could not sleep and I found this and while watching it I found I ticked all the boxes lol. I mean just look at my desk

so I started looking at stuff about this and what I found surprised me. For one the time to go to bed (Source “The London School Of Economics And Political Science”) [20,745 adolescents from 80 high schools and 52 middle schools]

As you can the time you go to bed at and when you wake up is connected. The higher the time of bed is the higher the IQ is. Staying up later will not make you smarter but most people who stay up are smarter I know I do it becuse I want the quiet to be able to think and work.

Another test done by Christina Schmidt and Philippe Peigneux of the University of Liege in Belgium “had 15 extreme night owls and 16 extreme early birds spend two nights in a sleep lab.” – newsweek, The Night owls had better reaction time after 10.5 hours compaired to the early birds “Both the early birds and the night owls were sleeping and waking whenever they pleased, rather than being kept on an artificial schedule.” “So don’t ask your early bird to do anything that requires sustained focus more than 10 or so hours after she gets up. And if you’re an early bird, you can stop feeling morally superior: night owls can keep their brains awake and alert for longer after they wake up—even if it’s after noon—than you can.” -newsweek

This site uses Akismet to reduce spam. Learn how your comment data is processed.